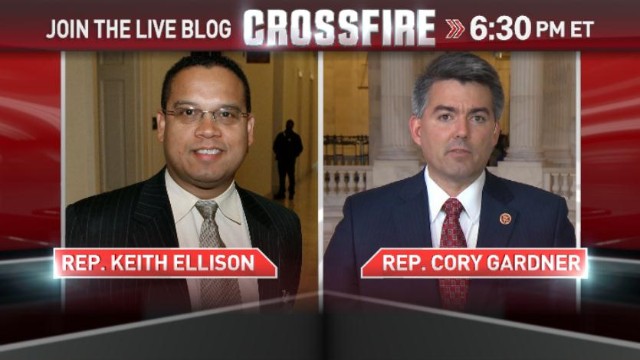 In the Crossfire: Reps. Ellison and Gardner

Days from the government shutdown showdown, the Obama administration on Wednesday released the first look at the cost to consumers of the federally run health care exchanges that launch October 1, saying that premiums under Obamacare will be lower than originally projected.

“Five days from now, on Oct. 1, millions of Americans who don’t have health insurance because they’ve been priced out of the market,” Obama said, “they will finally be able to buy quality, affordable health insurance.”

Despite Republican efforts to delay or defund the law, the president pressed, “The Affordable Care Act is here to stay.”

Tonight in the Crossfire: two members of Congress, Rep. Keith Ellison, a Democrat who supports Obamacare, and Rep. Cory Gardner, a Republican who opposes the law, join hosts Newt Gingrich and Stephanie Cutter to debate the costs of health care reform and the debt limit negotiations.

We want you to weigh in do you think the debt ceiling should be raised?

For the second time this month, Carney on Thursday challenged a reporter to a debate on CNN's "Crossfire."

Sens. Casey vs. Chambliss on Obamacare


Click to watch video
S.E. Cupp says Americans are unhappy with Obamacare and asks Sen. Bob Casey why there isn't more debate on the issue.