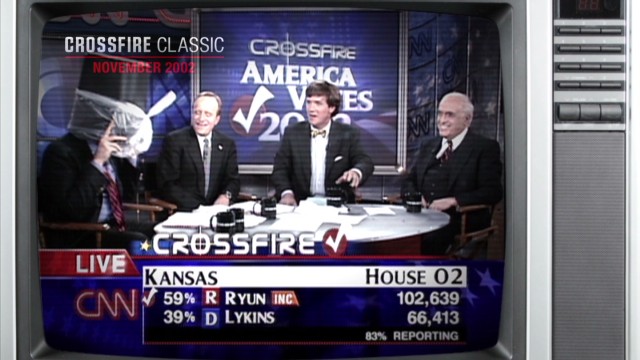 Since the 1982 launch of CNN's Crossfire, there have been plenty of unforgettable moments, including some memorable faces. Thirty-one years later, we recount nine of our favorite Crossfire moments, from passionate debates to settled bets.

Click to watch video
Musician Frank Zappa, cleaned up in a suit and tie, engaged in a fiery debate about dirty song lyrics.


Click to watch video
As we started pulling these tapes off the shelf, we were surprised to find so many guests who went on to become household names. In his 1998 appearance, Paul Ryan had not even begun his first term in Congress.

Click to watch video
Then-host James Carville responded to the 2002 Democratic mid-term election losses in a way only Carville could.


Click to watch video
In this clip, a "burning" debate raged between talk show hosts Rush Limbaugh and Bob Lassiter over the right to burn the flag.


Click to watch video
During a 1985 eviction fight, Philadelphia police dropped a bomb on a row house occupied by a group called MOVE. Six months later, MOVE member Louise James Africa appeared on Crossfire to defend the group against allegations it threw garbage in the street.


Click to watch video
CNN’s Crossfire never has – and never will – shy away from controversy. Sooner or later, anyone who works on Crossfire hears about a 1982 episode where the guest’s views offended the hosts – and we warn you, those views are no less offensive or repugnant now, 31 years later.


Click to watch video
One of the biggest surprises occurred when host Tucker Carlson promised to eat his shoes if Hillary Clinton sold a million copies of her autobiography. She delivered.

8. Ambassador to the UN Jeane Kirkpatrick on the Middle East (1988)


Click to watch video
Twenty-five years ago, U.N. Ambassador Jeane Kirkpatrick said something about the Middle East, including Syria, that’s as true now as it was when she said it.