As we count down to the re-launch of Crossfire, our new hosts are looking back at amazing moments from the program’s 23-year history.

Newt Gingrich shows a night in 1988 when figures from the Kennedy and Bush eras debate U.S. defense. Former Secretary of Defense Robert McNamara & about-to-be Vice President Dan Quayle were in the Crossfire discussing the Soviet Union’s military defense capabilities in the final days of the socialist state.

As we count down to September 16th’s return of Crossfire on CNN, we’re posting clips of the best moments from the program’s 23-year history. S.E. Cupp introduces a bittersweet moment with show-business legend Bob Hope who was in the Crossfire back in 1988. Hope shared a poignant moment while visiting troops at a hospital during a USO tour.

Crossfire preview: “A new conversation is needed in America”

As host Van Jones says in the latest promo for Crossfire, “Conservatives and liberals have a responsibility to the country to advance our views, and they’re not the same.”

Crossfire returns to CNN September 16, airing weekdays 6:30pm ET. The classic debate program features hosts Newt Gingrich and S.E. Cupp on the right, and Van Jones and Stephanie Cutter on the left. All four hosts agree that a new conversation is needed in America, and Crossfire will feature passionate discussions on topical events of the day.
END_OF_DOCUMENT_TOKEN_TO_BE_REPLACED 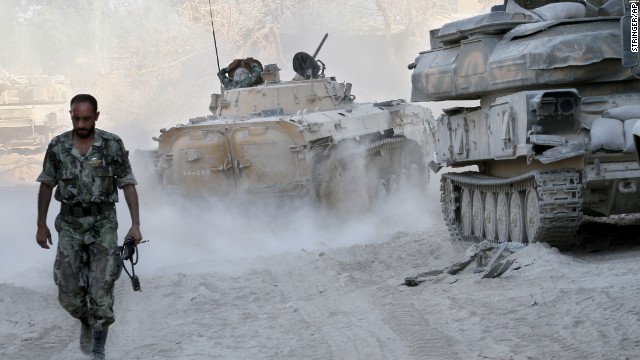 (CNN) - News that the United States is considering a military strike on Syria in response to the Bashar al-Assad regime's suspected use of chemical weapons suggests we could soon see an American bombing campaign on the war-torn country.

The atrocities that took place in Syria recently, such as those that have been taking place there for almost two years, are deplorable and inhuman.

Crossfire returns to CNN this fall. As we prepare for the re-launch, we’ve dug into our archives and found some classic –and controversial- moments that are worth seeing again. Crossfire host Van Jones has a 1983 classic featuring Rev. Jerry Falwell, that’s especially timely with the 50th anniversary of Dr. Martin Luther King’s “I have a dream” speech.

Is Obama leading from behind in Syria?

Every day as we count down to the debut of CNN’s Crossfire, our hosts are presenting classic moments from the program’s 23-year history. Today, S.E. Cupp shows us a 1993 debate that’s as timely now as it was 20 years ago: gun control. NRA’s Wayne LaPierre was in the Crossfire after a mass shooting in New York to defend gun owner’s rights.